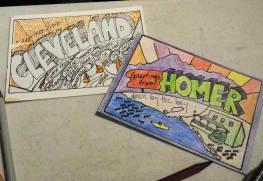 A Midwestern city of 700,000 and a coastal Alaska town of 5,300 might not seem to have much in common, but through a series of artists residencies held at Zygote Press, Cleveland, Ohio, and Bunnell Street Arts Center, the geographically distinct communities have forged an artistic connection.

Emery, a sculptor and printmaker, has designed and silkscreened black-and-white postcards that say “Greetings from Cleveland” and “Greetings from Homer.” On clotheslines at Bunnell the Cleveland cards with local addresses are looking for replies.

“I’m really hoping every Cleveland postcard here gets returned by someone in Homer,” she said.

Before arriving in Homer in mid September, Emery printed about 2,300 Cleveland postcards — one for every Homer household — and gave them out to anyone she could cajole. About 600 got filled out. She asked people to color the cards, add their name and address, answer questions like “what brought you here?” and send them to Bunnell. Homer people are asked to do the same thing on “Greetings from Homer” cards.

Emery is the second Cleveland artist to visit Homer. From September to November in 2013, sculptor Melissa Daubert also stayed at Bunnell in its bed and breakfast. Daubert did several public workshops that taught artists how to make sculptures from coir, coconut straw mat. Those works became part of Daubert’s installation, “String Calendar,” a series of pieces based on events and experiences Daubert had during her residency.

In Cleveland, Emery is the intern-in-residence coordinator at Zygote Press, a community printmaking studio. Last summer, Alaska artist Jimmy Riordan visited Cleveland, where he hand printed his translation of Francis James’ “Le Roman du Lievre.” The Alaska-Ohio residencies are funded by the Rasmuson Foundation as part of a program that brings Lower 48 artists to Alaska and sends Alaskans to the Lower 48.

That exchange is the root of Emery’s postcard project.

“I thought, ‘Wouldn’t it be nice if we had more than the two artists exchanging?”

A sculptor as well as a printmaker, Emery said she’s using the residency to focus on printmaking as an art. In her sculpture she makes fabric forms out of thrift shop clothes and then fills it with concrete.

Emery has taken over most of the Bunnell gallery as her studio. She’s borrowed several presses, including an etching press donated by the estate of Gaye Wolfe to Bunnell, a press Wolfe got with the help of a 2001 Stranded Art Fund grant. Emery also has been teaching weekly Wednesday workshops. Last week she taught a silkscreening class, and as a demonstration taught people how to print the “Greetings from Homer” postcard. Workshops are offered through Nov. 5.

On the west wall of the gallery, Emery has been slowly filling it up with prints she’s made. For First Friday on Nov. 6 she will have a show of her work. Her printmaking craft ranges from silkscreening to what she calls “Cleveland flashing,” etching images in metal flashing that has a gold coating.

Some images Emery does by hand directly into the plate, while others she makes from Photoshop-manipulated photographs. One image is a view out her B&B window showing the tops of motorhomes in the Driftwood RV Park against the Kenai Mountains and Kachemak Bay. Emery doesn’t curse fall’s gray skies, since gray in photographs works better in making plates.

A lot of Emery’s techniques use improvised materials or methods. For example, to make a silkscreen print from a photograph printed on paper with a laser printer, rather than go to the expense of printing the image on a transparency, Emery showed the silkscreen class a neat trick: rub cooking oil on the paper to make it transparent.

“It’s hard to quantify. What does an artist get? What does a community get?” she said. “Four years later, I’m still reaping the benefit of that residency.”

During her Homer visit, Emery has fallen into the rhythms of the town. A former road bike racer, to keep in shape Emery joined the women’s Nordic ski training group. For an hour or two daily she exercises with them. Some have taken her on trips across the bay.

“It’s been really great to find the trails,” she said. “It was a good way to make sure I got some sunlight every day — or some outside time.”

Outside of the Wednesday workshops, visitors are welcome to stop by and visit Emery and her studio during Bunnell’s daily hours 11 a.m.-6 p.m. Monday-Saturday and noon-4 p.m. Sunday. Emery works out with the Nordic group about noon-1 p.m. or noon-2 p.m., so call ahead at 235-2662.

Michael Armstrong can be reached at michael.armstrong@homernews.com.