Italian by birth, Claudio Orso-Giacone is a printmaker, paper artist, and mask and puppet maker from Oberlin, Ohio. He will be in residence at the Bunnell Street Arts Center in Homer and was nominated by Zygote Press, who praised his ability to invigorate communities with his “dynamic and large personality and with his very thoughtful, detailed, large-scale wood cuts.”

“I come from the Alps and love mountains and glaciers, so the exotic beauty of Alaska is quite seductive and inspiring for me, but above all I am very curious about the relationship between such a majestic landscape and the people who live this frontier, especially when tourist are gone and the true locals are left. My prints are narratives concentrating on humanity as observed under different lenses of allegories, such as political, satirical, religious, and psychological; I have been influenced by all makers whose art was as important as their lives, such as the German Expressionists, the Mexican muralists, the South Africantownship print collectives, and the postwar Latin American exiles; West African, Native American, Oceanic, and European Romanesque art have had the strongest impact on me in my studies;  The public aspect is a vital component of my practice: I love working in public demonstrating my work and answering questions because it makes me feel purposeful to invite others into the appreciation and practice of the work.”

Stay tuned for workshop information during Claudio’s stay in Homer!

Working with composers from across the country, Alaskan musicians based in New York City, plus three stars of the new music scene, present a varied and compelling program of music that reflects the culture, landscape, wildlife, danger, and transcendence of the national parks. This year, Wild Shore partners with the National Park Service. The program consider’s the Park Service dual mission of preservation and conservation. How does instrumental music make us stop, look, and listen, while also modeling ways to move through and play with nature?

Listen to, join in, and reflect on the age-old struggle to use and understand the natural world in all its beauty and danger.

The 2016 guest artists are clarinetist Ken Thomson of Bang on a Can All-Stars (and made into a cartoon on Arthur), cellist Mariel Roberts (who tours internationally with the MIVOS string quartet), and percussionist Owen Weaver, returning to Wild Shore after performing in 2014!

Kay Perry is an installation artist and community organizer who was born, raised and educated in Binghamton, NY. She graduated from Binghamton University with a degree in Mathematics and a degree in Graphic Design. During her time in Binghamton, she served on the board of the Gorgeous Washington Street Association, worked as the Creative Director of JungleScience Gallery and Art Laboratories and was a Commissioner for Downtown Development. It was there she gained recognition for her advocacy work in public art and grant writing, securing over $100,000 for art projects.  She has painted large scale murals at the Lee Barta Community Center, Binghamton University, Handicapped Children’s Association, Flood Wall on Water and Eldridge Street, The Parking Ramp on Water Street, the Parking ramp on State Street, Cyber Cafe West and Brooklyn Northside Festival. Perry lives in New Orleans.

Workshop Descriptions:
Wednesday 5/4 and Wednesday 5/11
Calling all carvers!  Do you spend a lot of time alone, attacking pieces of wood with pieces of metal?  Let’s balance things out a little by getting together to hang out and work.  Snacks will be provided; just bring something to work on by hand.  Hear what other carvers are up to, show off a favorite tool, and trade ideas, tips, or bits of wood!

Saturday 5/7
Are you curious about carving and fond of good clean fun?  Come and learn the basics of working subtractively using a friendly and familiar material:  soap!  Just bring 1-2 small sharp knives such as an X-Acto or paring knife that are a comfortable fit for your hand.  All other materials will be provided.  No age limit, no experience required; participants should be able to safely peel and chop a vegetable without supervision.

At the end of Harrison’s residency on Saturday, May 14, Bunnell will present a closing reception at 4 pm, to share the work products of her residency.

Gwendolen Chatfield is a folk musician from the United Kingdom, where she sings classic British folk songs and writes her own songs. She plays guitar, flute and accordion and also teaches ceilidh dancing – a traditional British form of barn dancing.

Over the course of Gwendolen’s residency she will work with the local community to create a sound map of Homer that explores notions of land, sea and memory through stories, sounds and songs. Her residency project is titled The Folk Tapes of Homer.

The residency begins with a solo concert, April 1, 8 pm and then ensues with a sharing stage and a collaborative stage. “In the first phase my initial aim would be to engage the community through a series of workshops introducing them to some of the folk traditions of Britain”

April 5: Ceilidh (Kay-lee) Dancing workshop – 6-9 pm – potluck at 6, workshop 7-9. Ceilidh dancing is a traditional British form of barn dancing which is entirely inclusive and suitable for all ages.

April 12: Ballads & Sea Shanties workshop – 6-9 pm – potluck at 6, workshop 7 to 9 pm. The second workshop is a folk singing session in which Gwennie teaches some of the ballads and sea shanties of the UK.

“The idea of the workshops is to not just share my traditions but inspire those who partake to think about their own folk narratives – the songs and stories that they’ve grown up with and on both a personal and collective level how the landscape they are surrounded by is imbued with said histories.” 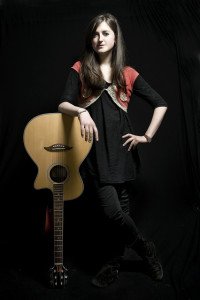 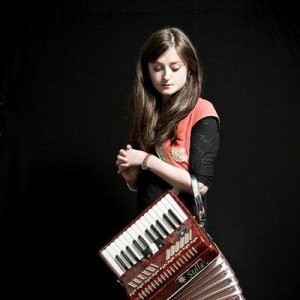 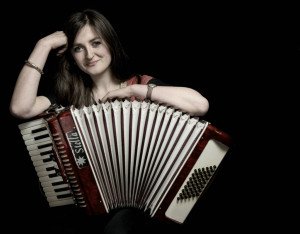 “Sugar Strings” shared new songs and old favorites at the Snow Ball Friday, February 25, at Bunnell. The elaborate and colorful cut and painted paper installation of Homer’s Desiree Hagen created a beautiful stage for the Snow Ball. Participants were encouraged to bring out their costume creativity. The band  followed the Snow Ball theme in white, including white wigs, but you can wear whatever you’d like. Sequins, spangle, feathers, fur, formals and imagination are encouraged! Bunnell was transformed into a scintillating center of costumed coquetry, masked madness and fashionable frivolity. 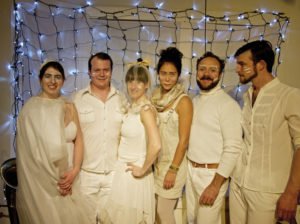 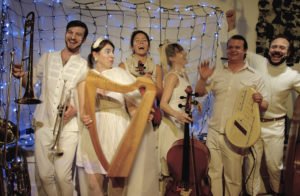 Desiree hosted a number of paper cutting workshops while she transformed the gallery space into a production studio.

Artist Statement: I find something very therapeutic about the act of cutting. If I don’t like an image I can cut more until I attain the desired results. It becomes a metaphor, the paper is the world as I choose to view it. It keeps my hands trained and busy; it empowers me. With a sharp blade, it becomes my meditation, and my method to express strong emotions that I often find difficult to vocalize. It’s one thing to draw a picture or paint, it is another entirely different expression to physically cut your image out of paper. It is my voice. When I create it is like an involved and deep conversation with myself that I feel comfortable sharing with the viewer. Paper is my language and with each piece I complete or each new technique I learn I am becoming more articulate and fluent.   Michelangelo said, “I saw the angel in the marble and carved until I set him free”. A blank sheet of paper becomes alive when I alter it. 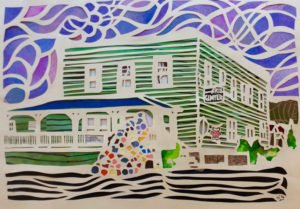 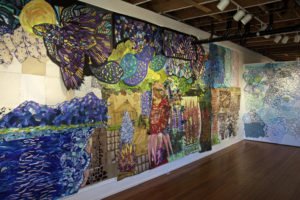 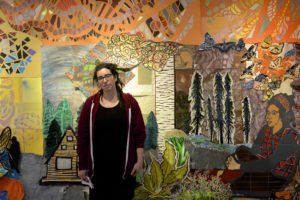