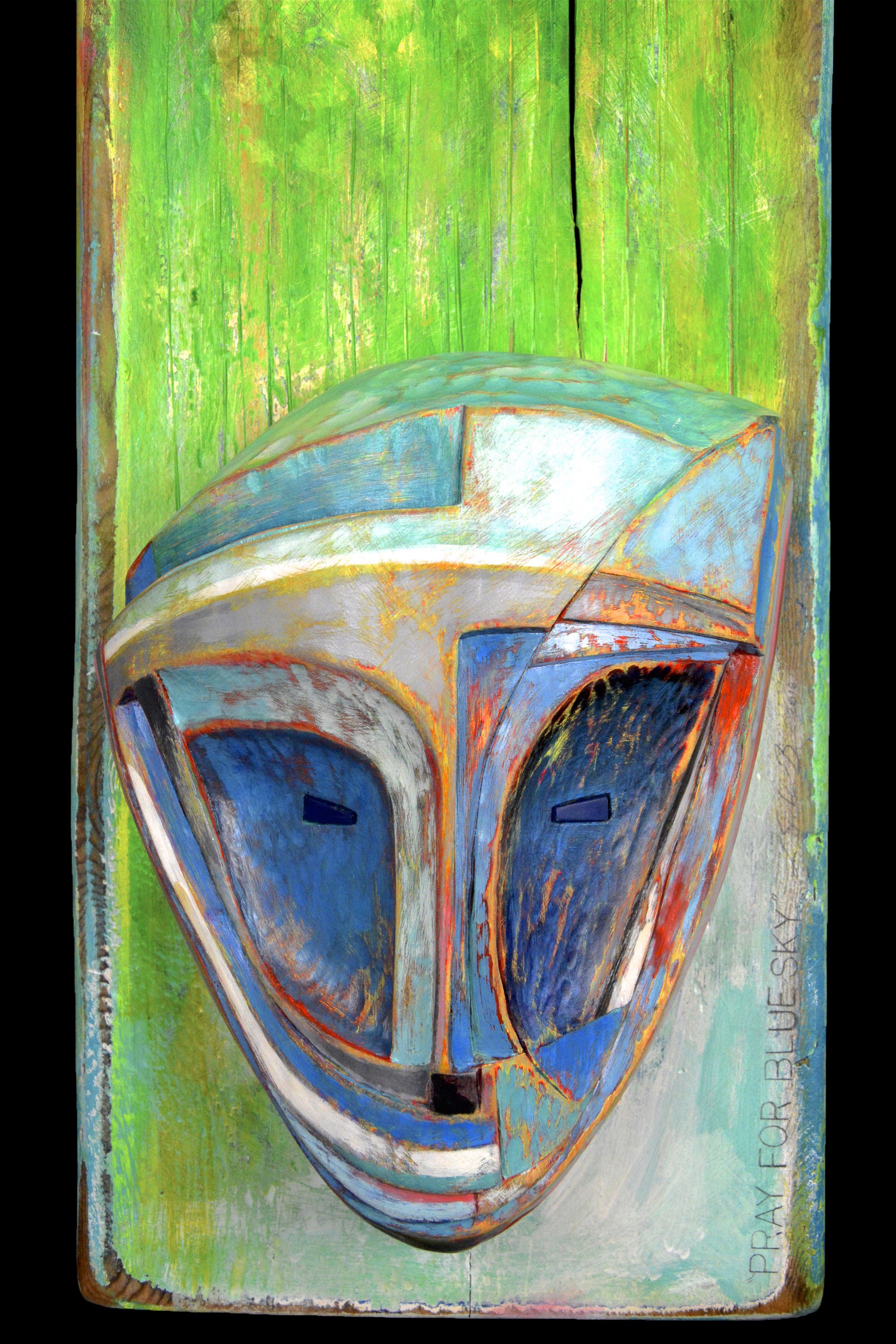 ASGURLUTA explores the thematic and conceptual conversations shared by indigenous Alaskan artists Lena Snow Amason-Berns, Alvin Amason, and Nathan Jackson. All are revered for their craftsmanship and innovation in paint and carved wood. ASGURLUTA is the Alutiiq word for bucking the waves or going against the current, a suiting metaphor for the determination and devotion it takes to persevere in creating art that pushes cultural boundaries in the modern Alaska communities where each artist lives and works. With respect to personal histories and individual cultural experience, this work honors teachers, family, and memories.

“I have three kids at home, and just to make it to the studio can be like bucking the waves,” says Lena. “There’s a song I wrote about bucking the waves called ASGURLUTA. One day when my husband Travis was out fishing at Cape Barnabus in a strong Easterly wind, he told me that it was rough seas all day and he didn’t catch any fish. But he saw a seal, a killer whale, a seal lion, and a whale that day. Sometimes amazing things happen even when you’re in storm. The song I made from that story, working with a couple elders who had fished in the all kinds of weather, helped me to tell story about bucking the waves. Its not always great weather out there, and things don’t always go the way you planned, but you want to go out again because you might see or experience something worth telling a story about later.”

Lena Snow Amason-Berns lives in the village of Old Harbor on the east side of Kodiak Island, having grown up in Port Lions, on Kodiak’s northern end. She earned a Bachelor of Fine Arts in painting from the University of Alaska Fairbanks. Lena’s work draws upon imagery, textures, and patterns found in and around the waters of Kodiak Island for many of her carvings and paintings. She has received numerous public commissions in Alaska and has work held in the collections of Chateau Musee Boulogne Sur Mer, France, and in Alaska by the Alutiiq Museum, the Pratt Museum, Alaska Native Heritage Center, Anchorage Museum of History and Art, the Baranof Museum, and the UA Museum of the North.

Alvin Eli Amason, Lena’s father, is a Sugpiaq Alaskan painter and sculptor, who was raised in Kodiak and currently lives and works in Anchorage. He received his Master of Fine Arts from Arizona State University and taught for many years at the Navajo Community College. In his position as director of the Native Arts Department at the University of Alaska Fairbanks, Alvin enriched the lives of students from all over Alaska, instilling in them the belief that their own stories are as valid as anything you might find in a book or museum. Having established the Native Art Center, a thriving program through the University of Alaska Anchorage, he continues to affect the lives of young and emerging artists. Alvin’s works are at home in the Nordjyllands Kunst Museum in Denmark, each of Alaska’s State Museums, the Heard Museum, and the Smithsonian. Amason is the 2018 recipient of a Distinguished Artist award from the Rasmuson Foundation and the Governor’s Award for the Arts and Humanities.

Nathan Jackson hails from Southern Southeast Alaska, in Ketchikan. He belongs to the Sockeye Clan on the Raven side of the Chilkoot Tlingit. Nathan is among the most important living Tlingit artists, as well as one of the most important living Alaskan artists. He is a prolific and highly respected artist in his community He is prolific and highly respected both within the community in which he lives as well as the larger community of Northwest Coast design. While totem poles are his most visible and best-known works, Nathan creates in a variety of media since attending the Institute of American Indian Arts in Santa Fe, New México. He works tirelessly to pass on traditional carving skills to younger artists by mentoring emerging carvers, as well as touring Alaska and the Pacific Northwest for demonstrations and workshops.

Donald Varnell was part of the original inspiration for a group show, and an important part of the conversations about the show but he was unable to participate for personal reasons.

Hover over the images below for artist and title information.
Artwork below is available for purchase here.

All artwork available for purchase here.