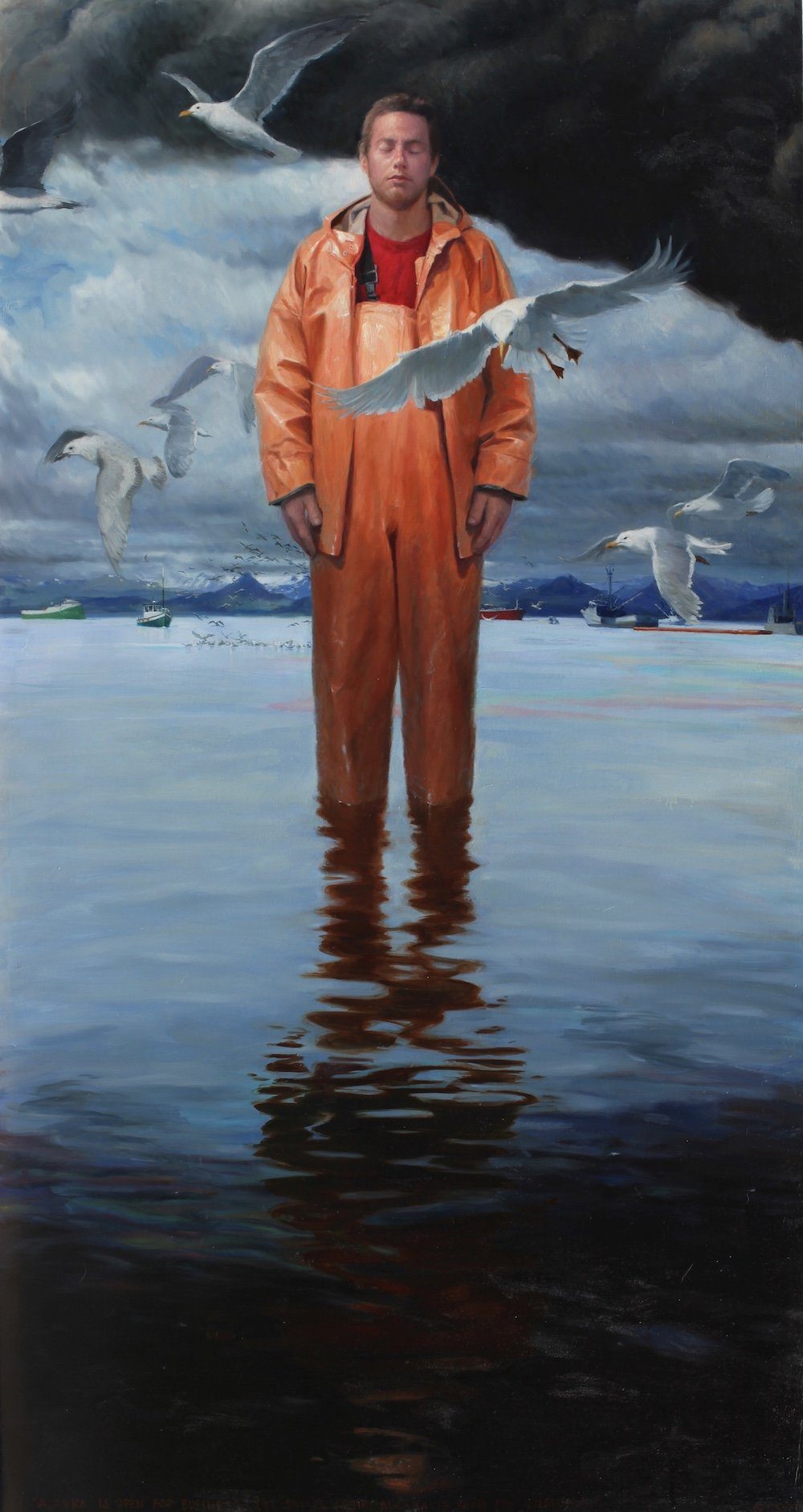 “Nature has always been the thread that sews my paintings together. Instead of being a part of nature, we see ourselves as existing in tandem with it: separate but together. This is, of course, an illusion. The complexities of our relationship with nature are infinite and they run the gamut from peaceful to the sublime and from pleasant to the horrifying. My work explores the many levels of our relationship with nature and seeks to convey the visceral emotions that come about when we are reminded of just how connected to our environment we truly are.” David lives in Homer.

Work is available for sale in our gallery and online.

One of the most potent, natural toxins, saxitoxin, is found around the globe but especially up and down the coasts of the Pacific and the Chukchi Sea. With warming waters, frequency of the toxin, created by algae blooms, has increased. Alaska has the only coastal, state government that does not regularly test its beaches for the presence of saxitoxin. This neurotoxin is known to have been weaponized by the US government for biological warfare prior to 1969. It is found, REGULARLY, in shellfish harvested for subsistence, year round, off the Alaskan Coast. I see the figures in this painting like actors on a stage, acting out the symptoms of PSP (post consumption) including rapid heart rate (tachycardia), numbness of mouth (circumoral paresthesia), headache (cephalgia), loss of control of limbs (ataxia), sense of floating, excessive sweating (diaphoresis), nausea, respiratory paralysis and respiratory failure.


The title from this piece is taken directly from the Governor’s mouth. “Open For Business” reflects the three major industries that operate here in Kachemak Bay including tourism, fishing and resource extraction (oil and mining). The health of both tourism (depicted here by the Danny-J) and fishing rely solely on the fragile balance of our environment. This can be seen by the effects on the tourism industry from the Swan Lake Fire last summer and this season’s shutdown of multiple fisheries due to low salmon run returns. The actions of the resource extraction industry (depicted here by the Polarcus) have very real consequences on the former two industries. This painting, depicting a industrial disaster just off the canvas and an oil spill response, is meant as a response to the current administrations’ (both federal and state) move to sell Alaska to the highest, outside bidders and their willingness to promote resource extraction to the detriment of Alaska’s land, environment and its people.


The importance of salmon to the Alaskan ecosystem, the communities and the economy can not be overstated. Every year, millions of salmon return to the rivers to spawn. Last summer, record temperatures heated many of these waterways above the threshold for salmon health. In Bristol Bay, home to the largest sockeye salmon fishery in the world, tens of thousands of fish washed up dead along the riverbanks never reaching their spawning grounds and causing the state to close commercial fishing in several locations. Exceptionally low returns this season have already caused many closures across the state. Although it is difficult to narrow down the cause for this season’s low return, the impact on the communities that depend on the salmon returning every year is evident.


Swan Lake Fire was started by lightning on June 5, 2019 during Alaska’s longest drought on record. Low humidity and extreme heat fueled the fire throughout the summer and into the fall. The fire effectively cut off the Kenia Peninsula from the rest of Alaska during the normally busy tourist season, costing the communities of the peninsula millions in lost revenue. Alaska saw 719 wildfires that summer that burned over 2.5 million acres making it one of the largest fire seasons to date. Lightning use to be a rare occurrence in Southcentral Alaska, but as the state warms both thunderstorms and droughts have increased creating a perfect storm for disastrous fires.

5 x 7 Studies By David Pettibone (oil on board)

These studies explore the history of the herring fishery in Halibut Cove. “A large-scale herring fishery began in 1911 to catch and process herring that came to spawn in Kachemak Bay and pods of beluga whales and harbor seals fed on the herring in Halibut Cove Lagoon. At the peak of the fishery, 38 herring salteries operated in Halibut Cove to pack the herring in barrels for shipment. The fishery ended in 1928 when the herring population collapsed and the salteries stopped operating. Possible causes for the collapse include overfishing and pollution of the spawning areas. Large purse seines and gillnets were used to catch fish before they could reproduce, and the salteries dumped fish waste on the beaches and in shallow waters destroying spawning habitat.” (Taken from coastview.org)

This painting depicts Gull Island, a popular tourist destination in Kachemak Bay. The gulls, puffins and murres that normally cover the island are absent on the rocks but are depicted only in the reflection. Massive seabird die-offs have spread across Alaska in recent years (hundreds of thousands of murres alone) and it is believed to be because of the loss of a once abundant food source due to warming waters.