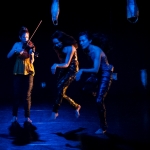 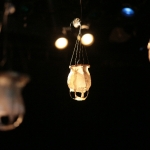 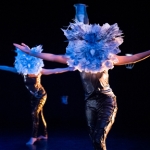 Niicugni is a multi-media installation/dance/music/performance. It has been touring the country to rave reviews. Read this New York Times article for more information about Emily Johnson and her Alaskan inspired Niicugni performance.

Niicugni, (nee-CHOG-nee) is a directive to listen in Yu’pik. It is the second part in a trilogy of works that began with Johnson’s Bessie Award winning The Thank-you Bar, which was performed in Homer at Bunnell Street in 2009, and was inspired by Emily Johnson’s childhood memories of her grandma’s Que-Ana Bar in Clam Gulch. The fish skin lanterns that make up the set for Niicugni were inspired by the “Skin Sisters” exhibit that ran at Bunnell Street Art Center in June 2009. It is so special to have this show come back to where it began – just like a salmon!

For more info about Emily Johnson and Catalyst go to www.catalystdance.com