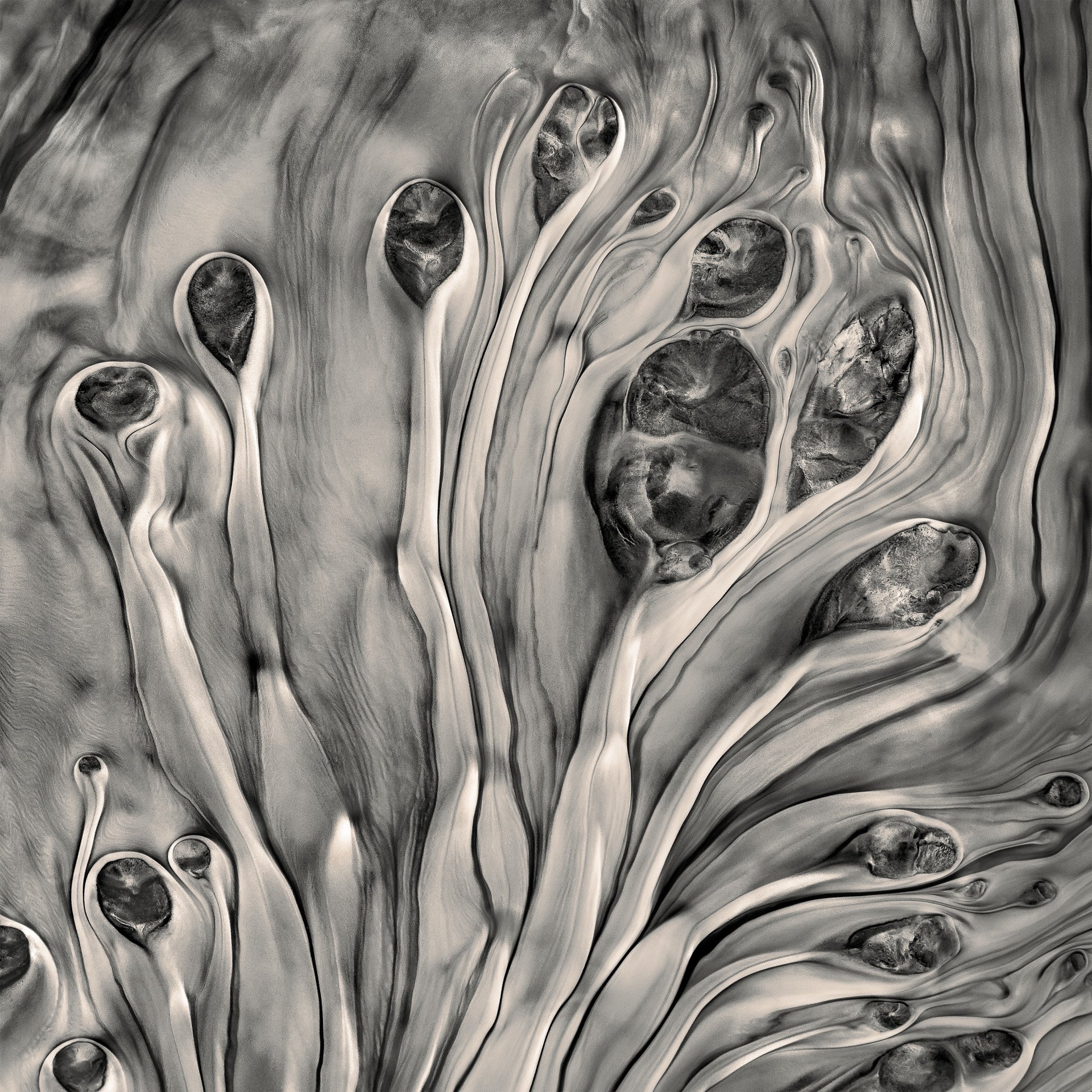 Work is available for sale in the gallery and at our online store.

Over eons, glaciers travel from mountain tops in their slow, unrelenting march to the seas. Grinding rock to powder and carving valleys in their wake, they create the landscapes we see today. These “rivers of ice” scour rock and soil from the mountain tops and valley walls carrying that debris in its icy grip. At the terminus moraine all these elements commingle, suspended in the melt waters of the receding glacier.

There is beauty here, but these intrinsic abstract forms are indirect evidence of the global ramifications of an alarming trend. Their swirls and sinews change by the millisecond. Patterns in the flowing mud and silt are the vanishing fingerprint of the glacier. These transitory images are all that is left as the ice disappears and the waters dry up—leaving just a hint of the glacier that once was.

American photographer b. 1959
Born Harold L. Gage Jr, (going by the nick name Hal) From an early age, Hal Gage showed a love of art and music. In high school and college he studied drawing, painting, and music theory and ultimately public communications with an emphasis on television broadcasting. In 1977, Gage was introduced to photography by his painting mentor, thereafter focusing his interest on photography. Gage has mounted dozens of solo exhibitions and been in hundreds of group exhibitions between 1986 and the present. In 2004 he mounted his first museum exhibition, “Ice: a personal meditation.” It subsequently toured the state of Alaska to museums in Fairbanks, Homer, Juneau, and finally to Portland, OR. In 2011 Gage mounted two followup series titled “Strangers: Tidal Erratics of Turnagain Arm” and “Ice Abstractions” that toured in Alaska. Most recently the series, “Flow: Glacial Silt Patterns” has toured Alaska. It was featured in the LensWork anthology, Seeing in Sixes, and several exhibitions and competitions nationally and internationally. Hal Gage has published 5 books of his work: Ice: a passage through time; Strangers: Tidal Erratics of Turnagain Arm; Gravel Quarries: Alaska; Urban Dance; and Train Trip. Gage has won several national and international awards including the Sony World Photography Award in landscape photography. He has twice been honored with a Rasmuson Foundation Individual Artist Fellowship, and produced four public art commissions in Alaska and Washington. His work has been exhibited extensively throughout Alaska, and has shown in Canada, Eastern and Western Russia, England, Germany, East Asia, and numerous venues throughout the United States. He lives with his partner the writer Jean Ayers, in Anchorage, Alaska.

I live on the north side of Kachemak Bay, and more specifically, on the shore of Mud Bay. Indigenous people have subsisted on and stewarded this place for thousands of years. Non-human beings have lived and thrived here for even longer. In experiencing this particular shore, I reflect on the passage of time, the process of never-ending change this meeting place has witnessed. I consider myself a current steward of this amazing spot on Earth. Watching this shore, these waters, this landscape, day after day, season after season, year after year, I have the privilege to witness and know this place intimately. Through my art making, I have been on a journey of inquiry and connection with this enchanting place at a deeper and deeper level.

Eroding storm berms along this beach expose old buried or partially exposed mussel shells. Walking, searching, collecting these shells, the remnants of lives previously lived here, is a meditation. After decades of being buried, the blue outer layer of the shells have separated and dissolved from the underlying layer of nacre, or mother of pearl, revealing the beautiful ‘pearls’ that I consider them to be. Their beauty and individuality are a marvel. Each is a treasure. Time spent on this shore is a precious journey of wonderment; experiencing the rhythm of the tides, watching storms come and go, taking in the spectacle of daily sunrises and sunsets…solitary time spent outside, listening to the sounds of the water in its many moods, the wind and the birds…. feeling the wind, the snow, the rain and sunshine on my skin….. and absorbing the supreme beauty that feeds my soul.

Through these mussel shell assemblages I reflect on the time I’ve spent on this edge of land where it meets the sea with the ebbs and flows of the tide. I’ve attempted to give these shells a sense of life and movement, the currents of the water, the texture of it when touched by the wind or when waters of different temperatures and salinity collide. I’ve attempted to show the wind itself, the vast schools of salmon that live and feed in these waters and the poetic flights of the shorebirds who come to feed here in the spring.

In a rapidly changing climate, compounded by living in this pandemic time of staying home and living with more intention and uncertainty, I have questions about what the future holds. Everything is connected. I ask myself where are we going? Where am I going, and what am I doing with the remaining time I have left? Much of the time, words fall short.  Preciousness transforms from the material to the irreplaceable…..time and connections.

Being Watchful
As soon as I felt a necessity to learn about the non-human world,
I wished to learn about it in a hurry.
And then I began to learn perhaps
the most important lesson that nature had to reach me:
that I could not learn about her in a hurry.
The most important learning, that of experience,
can be neither summoned nor sought out.
The most worthy knowledge
cannot be acquired by what is known as study —
though that is necessary, and has its use.
It comes in its own good time
and in its own way to the human who will go where it lives,
and wait, and be ready,
and watch.

Hurry is beside the point, useless, an obstruction.
The thing is to be attentively present.
To sit and wait is as important as to move.
Patience is as valuable as industry.
What is to be known is always there.

When it reveals itself to you, or when you come upon it,
it is by chance.
The only condition is your being there and being
watchful.