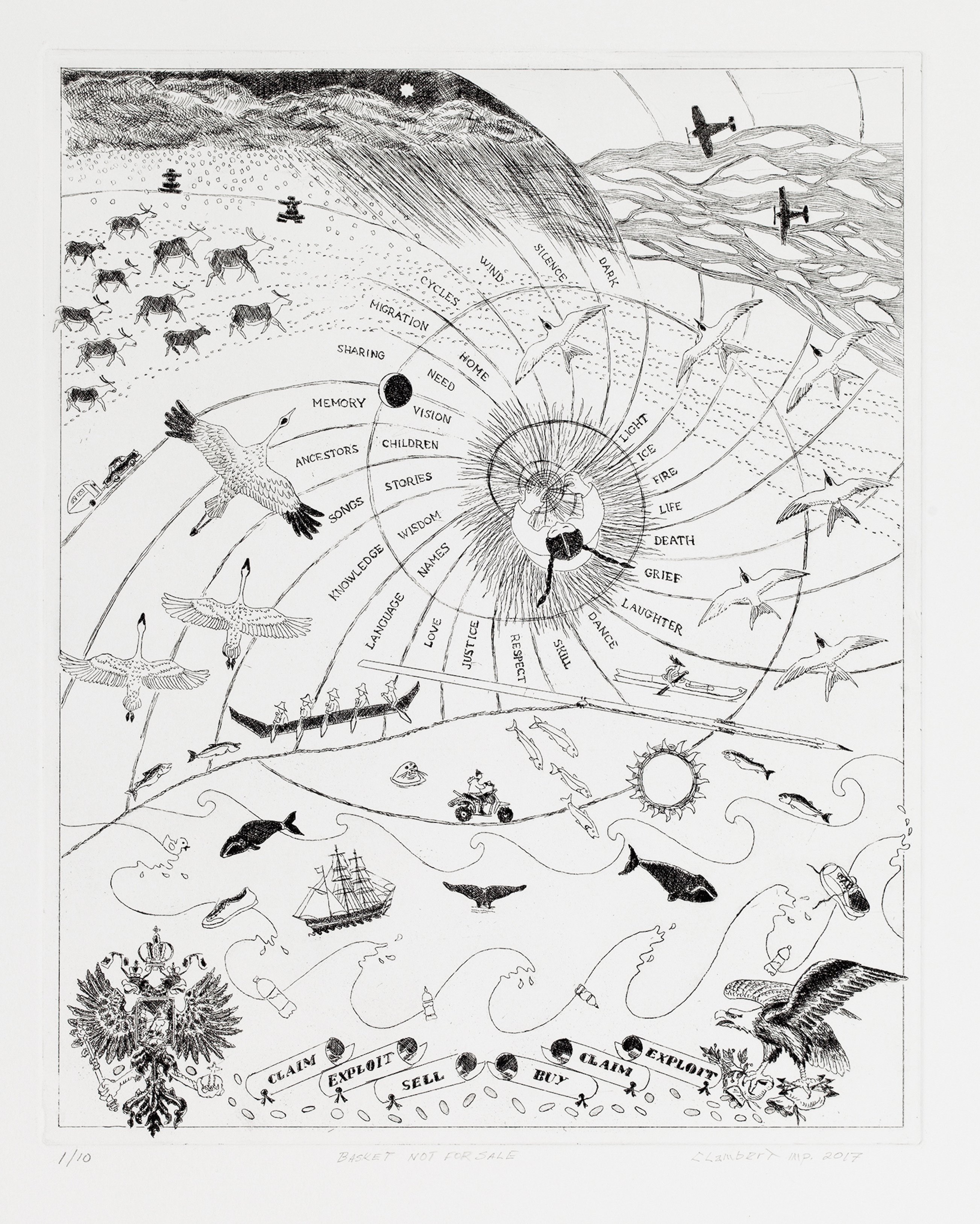 16 diverse Alaska artists address the Alaska Treaty of Cession as an intercurrent to “Seward’s Day” commemorations, to increase the prospects for honest discussion arising from a pivotal document that shaped and continues to inform the course of Alaska cultures and history. Pat Shelton, Anchorage-based artist, is curator of the exhibit, and describes its germination:

“The Sesquicentennial of the Alaska Treaty of Cession began to create a buzz in 2016 as communities and institutions made plans to recognize the 150th anniversary of the sale of the “Russian American” territory to the United States. I learned of “Seward’s Folly” and “Seward’s Icebox” in public school history classes. I do not recollect any mention of indigenous people or the treaty in school history textbooks. I had never seen the treaty. I decided to read the treaty.

Translation from one language to another is often fraught with misunderstandings and misinterpretations. What becomes very clear when reading the treaty is that the people who had ancestral roots in this land were left out of the negotiations, maligned by the words of the treaty and the actions of both the Russians and the Americans. It doesn’t take much digging to unveil the motivations and hypocrisies of such treaties. It is indefensible that a country who had recently fought a divisive, devastating civil war to end slavery would enslave the indigenous peoples of Alaska, separate families, forbid Native languages and cultural practices, and inflict adherence to an alien religion ruled by an omnipotent god whose image is that of the conquerors (the ones with a “Manifest Destiny”). Just as the Russian occupiers had done before the treaty. Just as governments and religions today are doing in many places around the world (including the United States) as people are uprooted, displaced, oppressed, imprisoned, and killed.

Through research I began to form my own ideas about the meaning of the Alaska Treaty of Cession. I decided to create an exhibit that would be an intercurrent to “Seward’s Day” commemorations. The exhibit’s concept is rooted in the belief that it is vital to offer autonomous interpretations and perceptions to the public, to increase the prospects for honest discussion arising from a pivotal document that shaped and continues to inform the course of Alaskan cultures and history. Issues inherent to the Alaska Treaty of Cession resonant with current global environmental, cultural, and political concerns. It is hoped that this exhibit will stimulate and expand conversation, creating meaningful dialogue about the Treaty of Cession and the complexities of human interaction.”