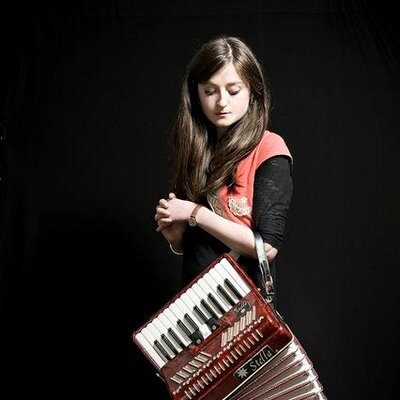 Gwendolyn Chatfield is Bunnell Street Arts Center’s international Artist in Residence in April, our top pick out of the over 100 applicants. We are very excited to host Bunnell’s first solo musician as artist in residence.

Gwendolen is a singer songwriter from the Untied Kingdom. She plays guitar and accordion and sings classic Brithish folk songs as well as writes her own songs. Gwendolen will conduct workshops on ceilidh dancing (a traditional British form of barn dancing) and perform concerts of her own work and traditional British folk songs.  Over the course of Gwendolen’s residency she will work with the Homer community to create an aural folk map of Homer that explores notions of land, memory and place through song. Her residency project is titled The Folk Tapes of Homer.

The first workshop introduces Homer to traditions of ceilidh dancing. The second workshop is a folk singing session in which Gwendolen teaches some of the ballads and sea shanties of the UK. The idea of the workshops is to not just share her British traditions but inspire those who partake and to think about their own folk narratives – the songs and stories that they’ve grown up with. All of the work created with the Homer residents and the songs she writes while in residence at Bunnell will be presented in a closing concert on April 27, 7 pm.