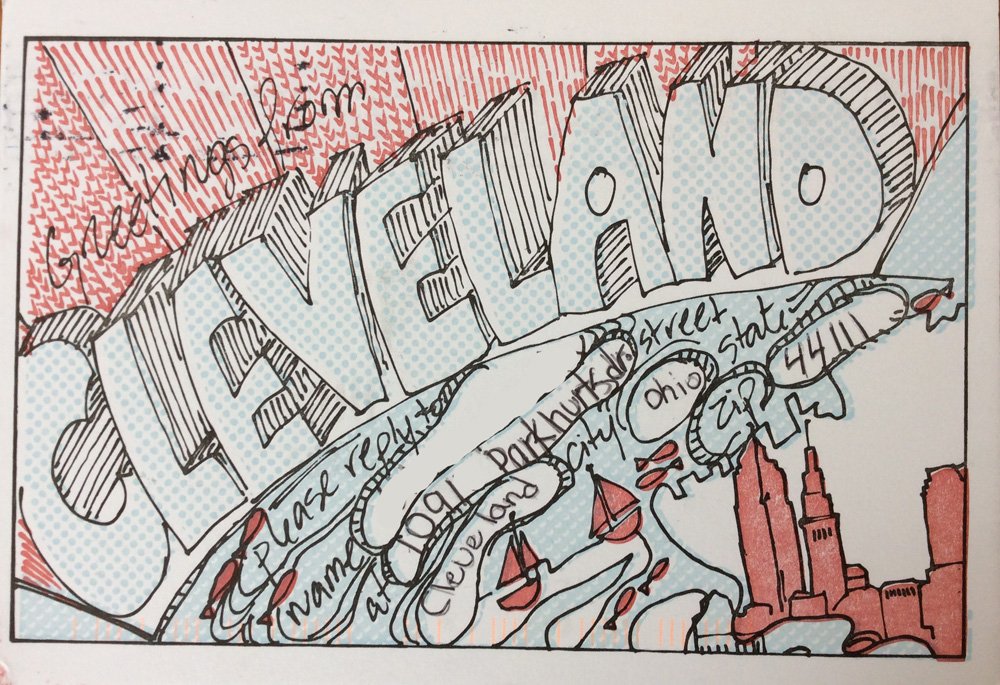 Elizabeth Emery has been doing art since she was a child.

“Something I remember doing was—probably not the first project because my mother is an artist as well, so we did it from very early on—but one thing I remember is in fourth grade, I used to do book reports. I would make cutout pictures,” says Emery. “I would do sort of Matisse-style cutouts of colored paper and I would put out these different shapes. I would create animals or scenes, or whatever like that. They were all very flat but they were made out of these cutout colored shapes.”

She says Matisse is still one of her favorite artists, but she’s branched out a bit from her childhood cutouts. Now, she’s also a sculptor and says she likes to test the limits of different materials and put them together in somewhat unexpected ways.

“I use fabric as a mold for plaster and concrete,” says Emery. “So, there’s a real contrast between the soft fabric and the really hard plaster.”

That’s what stands out about her art: it’s 2D and 3D, hard and soft, pposites that find a way to fit together.

When she travels thousands of miles away from home, to Alaska, she’ll also be returning to those artistic roots. She’ll be delving back into the world of two-dimensional print art for two months as the artist-in-residence at the Bunnell Street Arts Center.

This artist residency program is a brainchild of the Rasmuson Foundation.

“Starting about 15 years ago, the foundation began to evaluate how it could support a strong arts and culture sector in the state,” says Cassandra Stalzer, communications director for the Rasmuson Foundation. “We talked with a lot of partners, a lot of artists, a lot of arts organizations. The one resounding theme was that we needed to fund the development of artists in our state.”

Since then, Rasmuson has funded projects, workshops, art and culture camps, and more within Alaska. But over the last couple of years, it’s broadened its sights, beyond the state.

“So the artist residency program, while it only launched last year, is a new strategy for the foundation that allows Alaska artists to have new, in-depth residency experiences outside the state,” says Stalzer. “And, it brings outside artists to Alaska organizations, so we can learn from them, we can see their work, and the artists and the communities where they are in residence can be enriched by having exposure to new ideas and new processes for making art.”

Jeremy Pataky is the program coordinator. He’s the go-between for Rasmuson and the partnering arts organizations both in-state and out-of-state.

He says it’s important to have this kind of exchange.

“I think the more tools that people have to engage with the world around them and with each other, the better off the world is and the better off that we as individuals are,” says Pataky. “I think that the kind of attention and the kind of question that artists are able to share with those around them and the kind of behavior they’re able to exhibit through their creative processes really has an important role in a healthy community.”

That’s why, after artists are nominated by out-of-state organizations, the Alaska groups have a hand in choosing the right artist for them.

“We are thrilled to be hosting Elizabeth Emery for the next two months at Bunnell. She’s a multidisciplinary artist and an innovative artist in printmaking and in sculpture and we’re really excited about having her here,” says Kammi Matson, marketing director for the Bunnell Street Arts Center.

She says the arts center had a wonderful experience hosting a resident last year.

“[She]did a string calendar. It was one sculpture for every day she was here,” says Matson. “They were ordinary, mundane things, but they helped us see the beauty in the place we already live. So, artists who come have this fresh perspective on our place and help us connect more deeply with where we live already through seeing it through somebody else’s eyes.”

Emery plans to do a community postcard project. She’s made postcards in Cleveland and had locals fill them out with answers to “what brought you here?” and “why do you stay here?” They’ll be mailed to Alaska, where she’ll print partnering postcards for Homer locals to mail back to Cleveland.

“So, I wanted to have this exchange between these two sister cities, that it become this exchange residency program,” says Emery. “And to find out what the connections are and what the similarities are and also what the differences are.”

Emery hopes there may even be some connection between the people in the two communities who receive each other’s postcards. Like her fabric and concrete art and colorful childhood cutouts, from Cleveland to Homer, Emery is bringing opposites together.