The seeds for the success of this gallery were sown in 1989 by a small group of artists led by Joni Whitmore who collectively expressed the vision and energy to plant a dream of a gallery to which Homer would be quickly and deeply attached. Driven by a need for warm studio space and the promise of art sales, these folks identified gallery potential in the historic, albeit dilapidated, Inlet Trading Post. Down by the shore of Bishop’s Beach overlooking spectacular Kachemak Bay and the Kenai Mountain Range, the setting commanded appreciation and idealism. Claiming the first floor of the old building, the original “Great Company Gallery” invoked substantial renovations, resuscitating the beloved old building into an inviting gallery space. Ancient linoleum was scraped up to reveal hardwood floors in fine condition. Innumerable hardware bins and partitions were removed to expose the space to sunny southern exposure. The gallery was a mix of studio and retail areas. Tie-dyed T-shirts multiplied beside stoneware pottery, silver jewelry, wild-flower notecards and paintings of fantasy scenes. The collection was spirited, zany, and funky.

After one year the venue might have collapsed from desertion by most of the original crew. However, one of them, Kurt Marquardt, who had been chiefly responsible for renovations, decided to purchase the building. He was committed to the gallery’s survival and welcomed another group of artists to collaborate with him to keep the gallery open. Kurt’s commitment has been a critical reason for the gallery’s continued growth. From the beginning of his ownership of the Old Inlet Trading Post building, he agreed to a “pay as you can” contribution from the gallery. Five years after Kurt purchased the building the gallery was finally ready to carry a contractual lease. Bunnell Street Gallery has now rented its space for five years at a discounted rate that reflects its non-profit status.

The new crew decided to change the gallery’s format to showcase original fine art. “Bunnell Street Gallery” was its new name, and it initiated the current trend of local art shows changing monthly with a generous opening reception. Bunnell Street Gallery was immediately embraced by the community for its serious effort, a great step-up to a real gallery in Homer. Forging a conceptual structure to underpin the physical vision has been a slower, community-based project. The gallery has been in a steady process of evolution since its inception. The original collaborators joined others to form a charter Board of Directors and become a legitimate 501(c)(3) organization. In this move we affirmed several important goals: (1)self-sufficiency through a broader basis of financial support than sales, including fundraising events, membership and grants (2) attracting community support including volunteers for Board positions and gallery hosts (3) more effective networking and collaboration with other local, State and National non-profits.

The fiscal viability of artwork sales as a means of support of this gallery was still bleak after the first three years. Our short summers bring many art-loving tourists, but not enough to carry us through the year. More importantly, a growing motivation for the gallery leadership is art appreciation, education and exposure. Works of art need not be for sale. Separating art from the market as the measure of its value proved to broaden the scope of what the gallery presented and enjoyed.

Bunnell Street Gallery expanded its mission to accommodate concerts and performances suited to the intimate “salon” setting of the gallery. Responding to the ongoing need to exhibit, promote and educate in the visual arts area, the gallery brought a balance to our community that is already rich in large performance art venues and natural history exhibitions. Now, in addition to a forum for the visual arts, the community seeks frequent intimate music programs, concerts, plays, films, artist’s lectures and writer’s readings at the Gallery.

Once a hub of commerce for fisherfolk and homesteaders, a gathering place where one might sip coffee around the coal stove, the Old Inlet Trading Post lay derelict in the late 1980’s as Homer grew and new and larger specialty stores outpaced the Trading Post of the past. But, as the community of Homer has grown and changed, so has our commerce. Artists and art supporters here see that our current frontier is not these mountains and woods we admire daily, but the imagination this landscape provokes. Culture is the commerce of this day. The sense of community is maintained in a site for salvaging the creative outpourings of local folk. This is perhaps an innovate concept, a way in which Homer outpaces the fractured metropolis Outside. We have found our center, as the Bunnell Street Arts Center.

The historic Inlet Trading Post was erected by Maybelle A. and Arthur W. Berry in 1937, of Douglas fir, hemlock, and cedar, none of which are local. This wood was carried by steamship from Linfield, Washington, to Tuggehugt on Dena’ina land, a place renamed Bishops Beach in the 1960s.  The ground floor of the building, then called Berry’s, was a grocery, while the second floor offered rooms for rent. The store supplied a variety of merchandise to the young and growing community of homesteaders, fox farmers, and fishermen who colonized Homer.

Prior to the construction of Homer Harbor, boats moored in Beluga Slough. While awaiting a high tide to enter or exit the Slough, folks sat around a coal stove, drank coffee, and swapped stories at the Inlet Trading Post, a lively hub of commerce and community from 1937 until it closed in 1988. Maybelle Berry, famous for her square dance parties and weather signals conveyed from the rooftop, ran the store in the 1940s. Maybelle eventually remarried Edward Bunnell, who named the building and its street after himself. From 1944 to 1976, Henry Chamberlain and Hugh Watson owned the building, though George and Jane Bishop ran the store and renamed it Inlet Trading Post in the 1950s. This name has persisted due to the Bishops’ long tenure at the Trading Post.

Kurt Marquardt purchased the Inlet Trading Post in 1989 and renovations unfolded over the next several years. He respectfully preserved the historic ambience of the original layout, including window placement and style, while replacing the windows, roof, wiring, plumbing, and insulation, and renovating the porches. Kurt restored the floors, which were covered with laminate, and the exterior walls which were surfaced with asphalt shingles. He began calling old Homer “Old Town” and welcomed several start-ups that anchor Old Town today. Bunnell Street Gallery was hatched here in the early ’90s, as was Two Sisters Bakery, Old Inlet Bookshop, Kachemak Heritage Land Trust, Maura’s Cafe & Catering (2006-2016), and several brewers. Each occupant fledged and established a business in Homer.

Bunnell Street Arts Center, on the main floor, has an international reputation for presenting exceptional innovative Alaska art. Old Town Bed and Breakfast, which opened upstairs in 1993, features a private apartment and three guest rooms appointed with retro-style furnishings and fixtures.  Wild Honey Creperie offers breakfast and lunch in the former machine shop attached to the east side of the Arts Center.

Asia Freeman has stewarded the building since the early 1990s. She was raised in Homer and fondly recalls shopping here with her family. It’s been a few years since an old Sourdough entered the building in search of hardware and coffee, but stories are still swapped here, and the building remains a vibrant incubator of local culture and connections. Artist in Residence, Jared Charzewski, created “Bouys and Barrells,” the front porch sculpture with its walk-through tunnel in 2015, to slow traffic and signal the historic identity and vibrancy of the Inlet Trading Post. 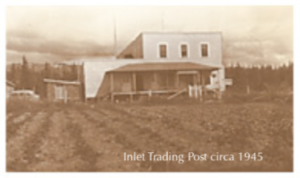 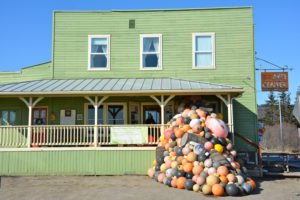 Where We Stand Now