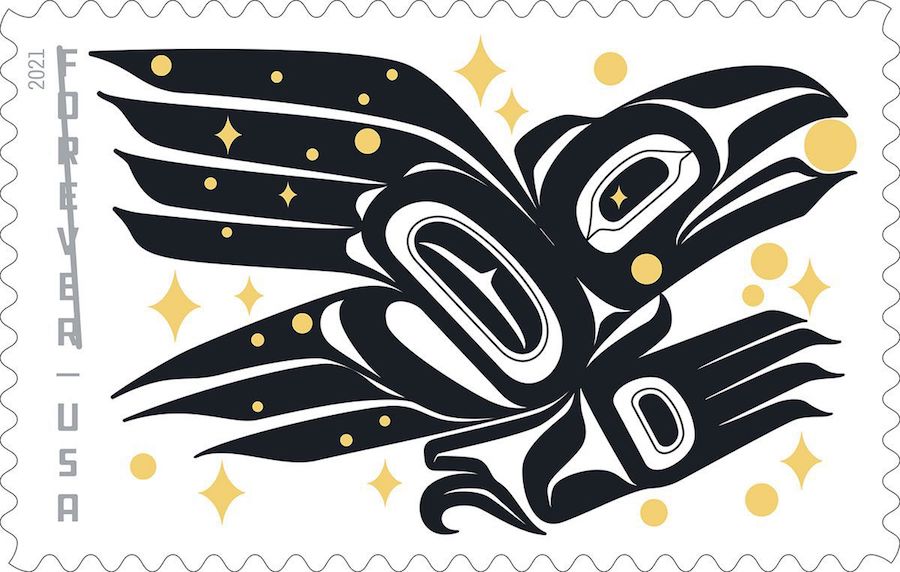 Tlingit and Athabascan artist Rico Lanáat’ Worl designed a new postage stamp to be released in 2021 for the United States Postal Service, inspired by a traditional Indigenous tale.

The Juneau-based artist says the stamp design, titled “Raven Story,” tells the story of trickster Raven, who sets free the sun, moon and stars before escaping from his human family and transforming back into bird form.

Worl said it was a tough to choose a story that has been depicted by many artists in many ways, but ultimately felt that the story was a gateway to Tlingit culture.

“There’s excitement and drama in there, there’s a lot of meaningful and important and heavy things, but I wanted to present that more light side of it — the excitement,” Worl said. “The moment where Raven steals the stars in that story, it’s the moment of a heist. He’s either going to succeed or fail here. He’s super excited, he’s got adrenaline running.”

“Being asked to do a stamp is a huge honor, in particular because it’s a national platform and it’s a huge audience,” Worl said. “I know there’s a collectibles crowd around it … an audience that’s outside of Tlingit, Alaska, and very much outside of standard Native American culture contexts.”